Young Elizabeth I of England

A striking baroque-style necklace showing opulence with rich colours and textures reminiscent of 16th century Europe. A hand painted miniature of the young Queen Elizabeth I, daughter of Henry VIII and Anne Boleyn, a coin from her reign (1572), mookaite jasper, a handmade ceramic component, rich velvet, jacquard ribbon, embossed leather, Swarovski crystals and pearls. It is truly stunning and flattering on the neckline.

Please read all info below. You will find details about materials used, size and weight and other useful information. If you have additional questions or you want to know more about my art, ask here.

This necklace features a portrait of Elizabeth I of England, daughter of Henry VIII and Anne Boleyn, Queen of England and Ireland from 17 November 1558 until her death in 1603. (Read more about her below)

I created this stunning piece with a rich colour scheme of burgundy and bronze with red and coral accents. It makes one go back in time, in Medieval Europe when royalty was dressed in rich velvet fabrics adorned with lavish trimming. I brought in just that with the metallic jacquard ribbon (from India), picking nicely the colours from the portrait itself.

The portrait in this necklace is a reproduction of a rare portrait of Elizabeth prior to her accession, attributed to William Scrots. It was painted for her father, Henry VIII in c. 1546. As I mentioned in the Queens Collection description, the portraits used are the last of their kind available. They were painted by two grand artists of Fedoskino art school (lacquer miniature art school outside Moskow), Tatiana Suvorova and Marina Pahomova, both retired. Their style, so suitable for the classic feel of this collection, is not matched by any other active artist of the Russian school, as I have been told by the dealers from which I purchase these portraits for many years.

Below the portrait sits a beautiful mookaite jasper stone (read about this stone below), a Swarovski rivoli, hand sculpted cold porcelain roses (from Thailand), and not the least, a coin from Queen Elizabeth's reign (1572). Yes, a 450 years old coin! I did a lot of research for these historical pieces and I bought from verified sellers. I used these coins with the purpose of bringing the energy of the past into these pieces and I would never use one that I would believe is not original to forfeit my original intent. HOWEVER, the coins I used in this collection are not certified and I do not claim with 100% certainty they are real. Nor do I reflect their rarity in the necklace price beyond what I originally purchased them for and the time spent sourcing them.

Above the focal sits a handmade ceramic component with roses (from France) which I chose to represent the Tudor rose, the traditional floral heraldic emblem of England taking its name and origins from the House of Tudor to which Queen Elizabeth belonged.

About the stone: Mookaite is an Australian Jasper of bold, earthy beauty with a fiery fusion of red and yellow energies. It carries an invigorating frequency of strength and vitality, and increases Life Force within the physical body. An Aboriginal Mother Earth stone, it is gaining in popularity throughout the world for its healing capacity, and for empowering one to feel and connect with the electromagnetic energy currents of the Earth. It enables one to utilize these positive energies to increase one’s will and focus one’s personal power. Mookaite promotes an ageless spirit willing to accept change and seek new experiences, and awakens one’s natural instincts in knowing the right direction to take. (link to source)

Elizabeth I (7 September 1533 – 24 March 1603) was sometimes referred to as the Virgin Queen. She was the last of the five monarchs of the House of Tudor. Her mother, Anne Boleyn, was executed when she was two and a half years old. She became queen in 1559, after the death of her older sister Mary I ("Bloody Mary"). One of her first actions as queen was the establishment of an English Protestant church, of which she became the supreme governor.

In politics Elizabeth was more moderate than her father and half-siblings and in religion she was relatively tolerant and avoided systematic persecution. Elizabeth's reign became known as the Elizabethan era. The period is famous for the flourishing of English drama, led by playwrights such as William Shakespeare and Christopher Marlowe, and for the prowess of English maritime adventurers such as Francis Drake and Walter Raleigh. Her 44 years on the throne provided stability for the kingdom and helped to forge a sense of national identity. (link to source) 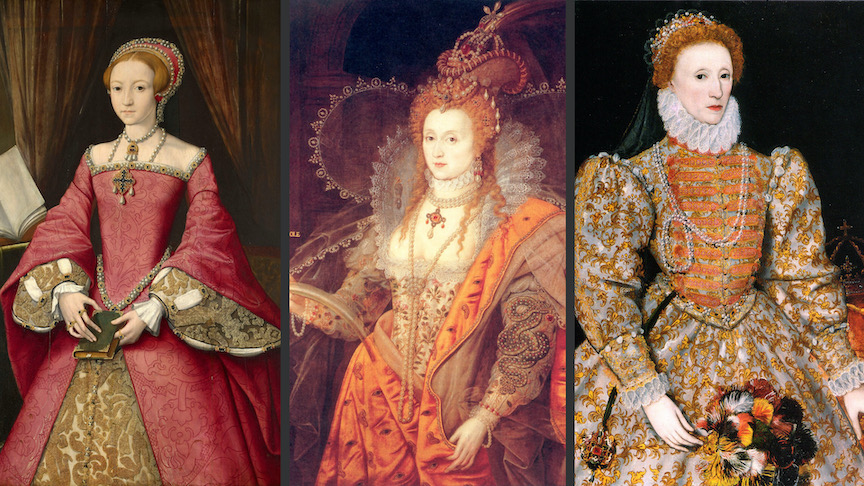